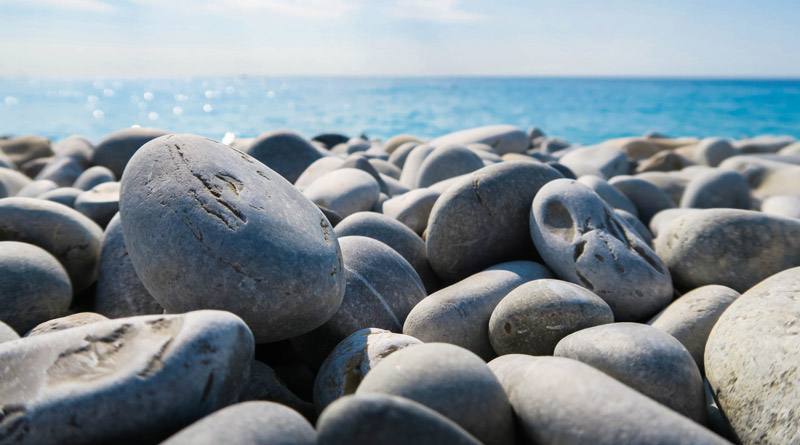 Bible Study
23rd May 2016 BibleStudy 1 Comment pebbles, rock, stone
Print This Page
Stones and rocks are the skeleton of the solid part of the earth on which the flesh of earth is laid. Stones are to be found everywhere: little flinty stones which the plough turns up in many a field; round, smooth pebbles on the sea-shores of the world; tumbling scree on the mountain sides, like a great overspill of waste rock from some factory in the heart of the mountains; giant rocks, cropping out of the earth, or standing like bastions against the washing tides; and coloured stones, precious stones in a multitude of varieties which give beauty and wonder to the face of the globe.

The Stone from God

It is not surprising, therefore, that we should find stones as part of the parables and lessons of Scripture. God Himself is the Rock, the solid, safe, secure and permanent base on which everything rests, the foundation of eternity. Ancient altars were made of stone. Sometimes the altar was prepared from the stones immediately to hand without special choice or searching. For example, when Jacob left home and spent his night sleeping in the open with a pillow made of stone, he made an altar on the spot in remembrance and in thankfulness, an altar on which he poured his oil as an offering to the God of Abraham, of Isaac and of Jacob. Although the stone was merely a pillar, it formed a place of offering and of meeting with God. Later on, the idea of stone altars was incorporated in the Law which Moses gave. There is a striking feature about the law of the altar. God does not specify what kind of stone is to be used: He does not choose granite in preference to limestone, or marble instead of sandstone. “If thou wilt make me an altar of stone, thou shalt not build it of hewn stone: for if thou lift up thy tool upon it, thou hast polluted it” (Exod. 20:25). Raw stone and undressed stone was to be used. Human shaping by human tools in human hands was not acceptable. Why? Surely the smooth cut and polished stone would have made a more acceptable edifice than the rough, unshaped rock pieces? No. Rock as it came from God out of the earth was the stone to be used.

What is the principle? An old promise couched in poetic form in one of the blessings of Jacob tells us something of the meaning. “The arms of his hands were made strong by the hands of the mighty God of Jacob; (from thence is the shepherd, the stone of Israel:) even by the God of thy father, who shall help thee; and by the Almighty, who shall bless thee” (Gen. 49:24, 25). This blessing concerned Joseph and his seed, but, beyond that, it pointed forward to One to come who would be both Shepherd and Stone. Human hands would have no part in him, no human father could claim to have begotten him, no human heart could have conceived or brought forth the marvellous character, the godliness and righteousness, of the Son of God. His hands were made strong by the mighty God of Jacob. He was a stone from God.

It is interesting to notice that when God reveals to Nebuchadnezzar the history of the ages to come and the work of man as contrasted with the work of God, the intervention of God in human affairs is by “a stone . . . cut out of the mountain without hands”. This is the Lord’s doing and it is marvellous in our eyes. The kingdom is the Lord’s and He is the Governor among the nations.

This concept of the work of God is variously described throughout Scripture, but always it is made plain that the work is the Lord’s. Solomon, when the temple was being dedicated, recognized the limitations of the work of thousands of workmen in raising up a dwelling place for God: “Will God in very deed dwell with men on the earth? behold, heaven and the heaven of heavens cannot contain thee; how much less this house which I have built!” (2 Chron. 6 : 18). Human hands have their uses, but “the most High dwelleth not in temples made with hands”; or, as Paul expressed it in Athens, where the temples to the heathen gods were plentiful and magnificent: “God that made the world and all things therein, seeing that he is Lord of heaven and earth, dwelleth not in temples made with hands; neither is worshipped with men’s hands, as though he needed anything” (Acts 17:24, 25).

The stone of salvation is the foundation laid by God. It is not of man’s devising; it is not man’s own thoughts polished up over the ages or man’s ideas cut to form a suitable basis for the world in which he lives. The stone is an inconvenient, awkward stone which fits no human structure but forms a firm and wonderful and perfect basis for the outworking of the purpose of God. Try as he will, man will never successfully shape Jesus to fit man’s schemes. Men in the days of the Lord himself tried to make Jesus a part of their building and ended up by rejecting him altogether—“The stone which the builders rejected” (Psa. 118:22). What happened to it? “It is become the head stone of the corner. This is the Lord’s doing; it is marvellous in our eyes. This is the day which the Lord hath made; we will rejoice and be glad in it.” Here is the key, “the Lord’s doing”, “the Lord hath made”—the stone was from God and was perfect for God’s purpose which is salvation for His people.

The Stone of Stumbling

It is interesting to follow the development of this idea in the rest of Scripture. Isaiah records these words: “Hear the word of the Lord . . . Behold, I lay in Zion for a foundation a stone, a tried stone, a precious corner stone, a sure foundation: he that believeth shall not make haste” (28:14–16). This prophecy is set amidst a condemnation of men who trust in ways of their own devising—lies and human confidences wherein there is no profit. The Stone is the only place of safety—the stone laid in Zion, Jesus the Son of God, the Shepherd and Stone of Israel, the One who was closed in a tomb of death by a large stone and was raised to life as “the foundation” stone of salvation. In commenting on Isaiah’s words Paul takes up the phrase, “he that believeth shall not make haste”, and clarifies its meaning for us by saying: “Whosoever believeth on him shall not be ashamed” (Rom. 9:33).

Peter makes the matter clear. In quoting the same words from Isaiah and in giving the meaning as, “He that believeth shall not be confounded”, he adds: “Unto you therefore which believe he is precious: but unto them which be disobedient, the stone which the builders disallowed, the same is made the head of the corner, and a stone of stumbling, and a rock of offence, even to them which stumble at the word, being disobedient” (1 Pet. 2:6–8). There is power in the Stone: power to save and power to destroy. The Stone is eternal; it is Christ. Those who believe and are obedient rest upon a sure foundation. Those who reject the Stone do so at their own peril. The Stone will destroy them in the end. What saith the Scripture? “Many . . . shall stumble (thereon), and fall, and be broken, and be snared, and be taken” (Isa. 8:14). Destruction awaits the rejectors. This is inevitable since “the stone that smote the image became a great mountain, and filled the whole earth” (Dan. 2:35). There is no room for anything but the Stone and those who belong to it. The rest is like chaff which shall be blown away.

Changing the order of the figure but maintaining the meaning, the Lord Jesus says: “Whosoever shall fall on this stone shall be broken.” These are those who are saved. They come to Jesus with broken and contrite hearts, with their past life confessed and rejected, and he receives them to himself as parts for the new temple of the Lord. And the others? “On whomsoever it shall fall, it will grind him to powder”—annihilation in the day of judgement. The power of the stone is designed for salvation, and salvation rejected is destruction.

One thought on “Stones & Rocks”