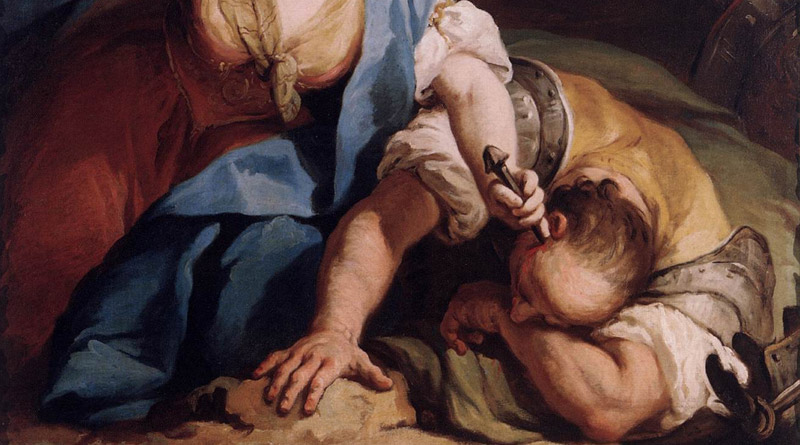 Bible Study Character Study
29th March 2016 BibleStudy 3 Comments Barak, Deborah, judges, Sisera
Print This Page
The people had been oppressed by the enemy for twenty long bitter years. When you read carefully through the Song of Deborah and Barak (Judges 5) you gain an insight into some of their problems. They were always in danger of attack along any of their highways (verse 6), and to collect water at a well was to put your life in jeopardy (verse 11). It seems also that at times the people moved out of their homes, towns and villages and went into hiding as the enemy came and stole the fruit of their harvests (verse 7).

Jabin the King of Canaan terrorised the northern regions of the land and the tribes of Zebulun and Naphtali suffered particularly. Their plight looked to continue as they had no iron for weaponry whi1st Jabin’s general, Sisera, commanded an army that included nine hundred iron chariots.

The people were in this sorry state because they had turned away from their God and the Lord had “sold them” (a sad familiar phrase in Judges) into the hand of the Gentile king of the north. In the former days of Joshua, Hazor the fortress of Jabin (this name is a title rather like ‘Pharaoh’) had been completely destroyed (see Joshua 11:1-11). So how tragic it was that Hazor with its warriors equipped with chariots was allowed to rise up again.

Women were very vulnerable in these violent times and the words of her “wise ladies” to Sisera’s mother when her son fails to return from the battlefield are very telling: “To every man a damsel or two” (Judges 5:30). How wonderful it is then that God should use two women in Deborah and Jael to bring the affliction to a close.

We first read of Deborah being in Mount Ephraim (Judges 4:4,5), some distance south from where most of the trouble was centred. She resided by a notable palm tree (which spiritually speaks of uprightness and her wisdom as a prophetess made her a person of renown. Her husband does not feature in the record at all, other than that we are told his name “Lapidoth” which means ‘torch’ or ‘firebrand’. Hence we are introduced to a prophetess associated with the light giver. Dwelling between Ramah (‘hill’ or ‘heights’) and Bethel (‘the house of God’), Deborah ministered so that her people might ascend and be in close fellowship with their God and with others of a right spirit.

The characteristics of this special woman are shown in her name which means ‘bee’. These insects, of course, are very industrious and produce a sweet benefit for man. They are not self-seeking either, but work hard for the community. A bee generally is harmless but it will sting if provoked and will die as a result. Deborah likewise was prepared to wage war and put her life in peril for the sake of her people.

By God’s grace she called for Barak the son of Abinoam to come to her for guidance. His name means ‘lightning flash’ and he was a heavenly light as he gave spiritual as well as military leadership. His name is also indicative of how Sisera would be defeated by thunderbolt, storm and tempest. “Abinoam” means ‘my father is delight’ and in this we readily see that Barak is a type of Christ.

Deborah commands Barak to gather 10,000 men out of Naphtali and Zebulun and to assemble them upon Mount Tabor. Barak agrees to do this but only after he has been reassured that Deborah will be accompanying him. The wonderful plea he makes to her, “If thou wilt go with me, then I will go: but if thou wilt not go with me, then I will not go” (Judges 4:8) is not to be misunderstood as an expression of weakness but rather as one indicative of his understanding and faith. Deborah was a prophetess and Barak needed God’s word close to hand. At this meeting Barak is also informed that Sisera would be killed by a woman.

By Barak assembling his men upon Mount Tabor, Sisera was encouraged to bring all his chariots out upon the flat plains of Jezreel that lie at the foot of the mount, just as Deborah predicted. This terrain was ideal for these vehicles of terror. Now Sisera must have been very confident of victory as the men of Zebulun and Naphtali were soon surrounded. If the Jews stayed on the mountain top they would die as in a siege. Alternatively, if they chose to descend and fight, Sisera knew that they had no iron weaponry and his chariots would soon overwhelm them. Barak’s take up position seemed to be one of complete foolishness.

Sisera was informed of Barak’s location by Heber (‘comrade’) the Kenite (Judges 4:12). This foolish man was related to Moses’ father-in-law, Jethro, and he knew of Israel’s God. His people had lived among the tribe of Judah for generations but he had chosen to separate from the people of God and to be a friend of Jabin and Sisera instead. The name “Zaanaim” (Judges 4:11) means ‘removings’ and so it was that Heber made a disastrous decision. His wife Jael must have been much aggrieved by this change of comradeship.

With both Barak and Sisera’s armies in position and set according to the Lord’s will, we read of Deborah’s battle cry: “Up; for this is the day in which the Lord hath delivered Sisera into thine hand: is not the Lord gone out before thee?” (Judges 4 verse 14). The phrase, “this is the day” will be used again when God intervenes to destroy Gog (Ezekiel 39:8). In faith the men charged down the mount without iron sword or spear and miraculously they were victorious. By reading the words of Deborah and Barak’s song (Judges 5:20-23) we understand that God dramatically intervened on their behalf with a great storm. The thunder, the lightning (Barak’s name) and the heavy rain in a flash caused the River Kishon to overflow. The chariots of Sisera were rendered useless by the torrents that overflowed the plains of Jezreel. The men with Barak then slaughtered the enemy but they were not alone for again we can ascertain from the song (e.g., Judges 5:8) that men of faith from other tribes numbering in total another 30,000 arrived on the scene and helped their brethren. So it was that by faith and God’s blessing that the people of God overcame the enemy comprehensively.

Remarkably, Sisera escaped the carnage and ran for his life. He sought refuge in Jael’s tent but there he met his end. With Sisera asleep she now, with much faith in the Lord, courageously hit him with a tent mallet. The name ‘Jael’ means ‘mountain goat’ and so we see her like this unobtrusive, shy animal being sure footed in an effort to be in the spiritual heights. The song (Judges 5:26,27) indicates that this brute was only stunned by the initial blow and so he must have staggered to his feet. Just imagine how frightening this must have been. However, in faith, she struck him again and he fell at her feet. Jael then smote him once more and pinned his head to the ground. When Barak arrived and went eventually inside the tent, then he understood the words of Deborah given to him upon Mount Ephraim: “The Lord shall sell Sisera into the hand of a woman”. With this great victory there was peace in the land for forty years. The relief and joy experienced by the faithful must have been tremendous. We note that the song of Barak and Deborah was given straightway “on that day” (Judges 5:1). There could be no delay in this praise and thanksgiving.

The conclusion of the song is a cry for all generations: “So let all thine enemies perish, O Lord: but let them that love him be as the sun when he goeth forth in his might” (Judges 5:31). The godly (among whom we pray we may be counted) are told that all God’s enemies will be destroyed. Wickedness may seem everlasting but it will be conquered. As for those that love Him they are likened to “the sun” which is the heavenly body supreme in the heavens. We are encouraged further by these words being alluded to by the Lord Jesus when he ends his parable of the wheat and the tares: “Then shall the righteous shine forth as the sun in the kingdom of their Father. Who hath ears to hear, let him hear” (Matthew 13:43).

Finally the whole drama described in Judges chapters 4 and 5 should also be considered as an echo of the words of Genesis 3:15: “And I will put enmity between thee and the woman, and between thy seed and her seed; it shall bruise thy head and thou shalt bruise his heel”. Jabin plays the role of the serpent. His name means ‘intelligent’ or ‘wise’ and so he is a manifestation of the thinking and wisdom of this world. He is more “subtle than any beast of the field”. Sisera means ‘battle array’ and it is this ‘seed of the serpent’ which wages war rather than Jabin, ‘the serpent’ itself. We note too that with Sisera’s death both the seed of the serpent and the serpent are destroyed together. The fact that women figure so prominently in this battle should not surprise us as they take on the role of ‘the woman’. It is Barak who is ‘the seed of the woman’. How fitting it is, for example, that Sisera is to be found dead in the tent of Jael. She, like the Lord, both wrestles and ‘bruises in the head’ the enemy within her own tabernacle. It is Barak though who emerges from that tabernacle like Christ from the tomb. There is a resurrection to newness of life and a new age of righteousness and peace.

3 thoughts on “Deborah and Barak”