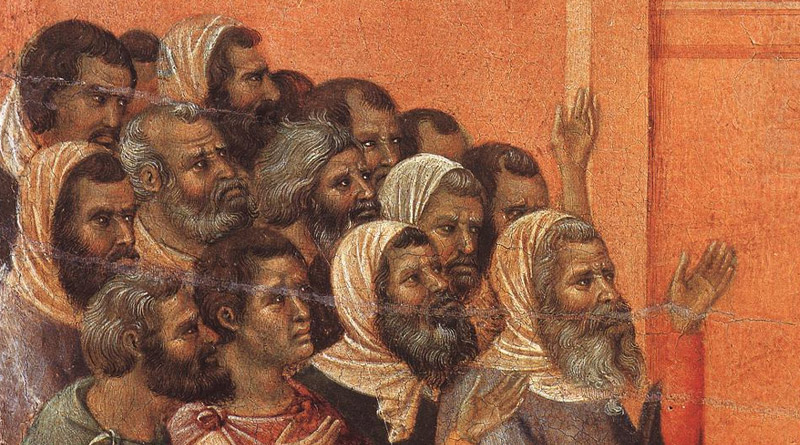 Sermons
29th March 2016 BibleStudy 0 Comment hypocrites, Jesus, pharisees, scribes
Print This Page
The message we have been given in Matthew 23 is a stern warning, not just to the Jews, but to all those who put their trust in God. In the previous chapter of Matthew, Jesus is repeatedly asked questions, trying to test him and destroy his life, which they did eventually, but here Jesus silences them once and for all with his own question, and they couldn’t answer him.

Now while the Pharisees were gathered together, Jesus asked them a question, saying, “What do you think about the Christ? Whose son is he?” They said to him, “The son of David.” He said to them, “How is it then that David, in the Spirit, calls him Lord, saying, “‘The Lord said to my Lord, Sit at my right hand, until I put your enemies under your feet’? If then David calls him Lord, how is he his son?” And no one was able to answer him a word, nor from that day did anyone dare to ask him any more questions. (Mat 22:41-46)

Not that Jesus was saying they literally sat in the seat of Moses, for they weren’t successors to his office nor were they the priest who sat in Moses’ seat when the Sanhedrin was in session, but rather Jesus was referring to the fact they had put themselves in a position of authority to teach and explain the law of Moses, and by extension, the law of God, to the people.

…so practice and observe whatever they tell you–but not what they do. For they preach, but do not practice. (Mat 23:3)

It sounds a little bit contradictory, but Jesus is saying that they won’t go wrong if they actually following the teachings of the Pharisees, and we always think of them as a bad group but there was probably no better sect at the time for teaching the law of God to the people, observing the sacrifices, and the Sabbath days, so in that respect the Pharisees were doing a good job. The problem with them though was not what they taught, but what they did, they didn’t practice what they preached and Jesus goes on to give several examples of their failings.

They tie up heavy burdens, hard to bear, and lay them on people’s shoulders, but they themselves are not willing to move them with their finger. (Mat 23:4)

What a contrast this is to the teachings of Christ, in Matthew 11:29,

Take my yoke upon you, and learn from me, for I am gentle and lowly in heart, and you will find rest for your souls. For my yoke is easy, and my burden is light.” (Mat 11:29-30)

Jesus takes pleasure in offering to share the burden with us, but not the Pharisees, and Jesus really exposes their motivation in v5.

They do all their deeds to be seen by others. For they make their phylacteries broad and their fringes long, (Mat 23:5)

This is what it was all about, being seen by others, being seen to be holy and righteous.

The phylactery comes from a word meaning to guard, to preserve, and were designed to be worn like an amulet or charm protecting the wearer from evil. The practice came from the command in two Old Testament passages, one in Exodus and the other in Deuteronomy.

“You shall therefore lay up these words of mine in your heart and in your soul, and you shall bind them as a sign on your hand, and they shall be as frontlets between your eyes. (Deu 11:18)

The idea was that by wearing the Word of God and committing it to memory, they would have it in their minds at all times and it would act as a safeguard and help them see the stumbling blocks in front of them and prevent them from sinning against God. In Psalm 119:105 we see that very idea,

The words of God will help light our path, ignorance isn’t an excuse, for if we stumble around in the dark the pitfalls will still be there, we just don’t know where they are. The holes in the ground aren’t going to magically disappear just because it’s too dark to see them. The wise man will take a torch with him.

The words weren’t meant to be taken literally by the Jews, but the Jews in Jesus’ time made little boxes that they attached to their foreheads with straps and rolled up little bits of parchment with the law on very tightly and put them into the boxes, and they though that this would protect them from sin.

The Pharisees took it a step further and made their boxes as big as they could. By doing this they would impress upon the people how holy they were. The law commanded that fringes or tassles of blue were placed on their garments as a reminder that they were separate from the other nations and that they might remember to keep the commandments of God, but the Scribes and the Pharisees made them ridiculously long to bring them to the attention of others.

and they love the place of honor at feasts and the best seats in the synagogues and greetings in the marketplaces and being called rabbi by others. (Mat 23:6-7)

They loved anything which elevated their status in society and made them look better, more important and holier than everyone else, but Jesus instead issued the people and his disciples are stern warning.

Of course these are fundamental principles to all preachers today, teaching with humility, exhorting in love, but at the time of Jesus the people were expected to respect the religious order, and not to question it, and the Scribes and the Pharisees were something to be admired and held in high regard.

Jesus delivers his damning discourse as he presents a series of woes upon the Scribes and the Pharisees.

“But woe to you, scribes and Pharisees, hypocrites! For you shut the kingdom of heaven in people’s faces. For you neither enter yourselves nor allow those who would enter to go in. (Mat 23:13)

The word hypocrite is a very strong word and it’s from a Greek word that was given to the Greek play-actors, and that’s exactly what they were, men hiding their true characters behind a mask of righteousness to receive the praise of others. Of course they expected all the gains that came along with it too, like the financial gain, the political power, and they expected it because they were the holy ones and nobody dared to question it… except Jesus.

We are all capable of play acting, we all have it within us. Young children will play-act as part of their development, acting out roles of family members, or someone they have observed. We’ve all seen children playing doctors and nurses, or having tea parties for example. It’s when we reach adulthood and are still play-acting in order to fool others into believing something that we are not, that’s when it becomes hypocrisy.

In the Old Testament the distinction is made between the sinner and the hypocrite. With a sinner you know what you are getting, but with the hypocrite there is a façade and it could be hiding anything behind. Without the mind of Christ, without the humility that he taught to his disciples, we are quite capable of being just like the Pharisees, hiding behind a mask and acting a part that we are not normally.

God placed a lot of emphasis on taking His word into our hearts, he wants us to remember it and live by it. Psalm 119 for example is divided into 22 sections, with each section starting with the next letter in the Hebrew alphabet. This was an aid to memory, but unfortunately we lose this in our English language. God wants us to live by his word, not merely sit in the seat of Moses.

Therefore be imitators of God, as beloved children. And walk in love, as Christ loved us and gave himself up for us, a fragrant offering and sacrifice to God. (Eph 5:1-2)

Paul says we should be imitators of God and do the things that we have been asked to do of him, and Jesus said in Matthew 22.

Christ gave himself to his Father, he gave his life as a sweet smelling sacrifice to God. He gave his life so that we may live and that’s what we are here to remember.

But this is the one to whom I will look: he who is humble and contrite in spirit and trembles at my word. (Isa 66:2)

Christ certainly had the respect for the word of God, he was a perfect example of humility. Not like the Pharisees, who had only eyes for themselves. When we meet together on a Sunday, when we talk together afterwards, we should be transparent, our true character should be plainly visible. We shouldn’t be wearing our Sunday faces. Our character here should be the same character as we have the rest of the week.

Jesus makes reference to the taking of oaths, in Matthew 23:16-22, and the false oaths that they made in the temple. The practise of swearing on or by things, like the temple or by heaven, or by the altar was very common among the Jews. James has the answer for this in James 5:12.

But above all, my brothers, do not swear, either by heaven or by earth or by any other oath, but let your “yes” be yes and your “no” be no, so that you may not fall under condemnation. (Jas 5:12)

That word condemnation is the same word that’s translated as hypocrisy in all other cases, and so it’s a warning to us that we can fall into the same condemnation of the Pharisees should we make promises that we cannot, or do not choose to keep.

Jesus speaks of another four woes before his lament for Jerusalem at the end of the chapter.

Righteous are you, O LORD, when I complain to you; yet I would plead my case before you. Why does the way of the wicked prosper? Why do all who are treacherous thrive? You plant them, and they take root; they grow and produce fruit; you are near in their mouth and far from their heart. (Jer 12:1-2)

But it wasn’t the fruit that God wanted and…

Many shepherds have destroyed my vineyard; they have trampled down my portion; they have made my pleasant portion a desolate wilderness. They have made it a desolation; desolate, it mourns to me. The whole land is made desolate, but no man lays it to heart. (Jer 12:10-11)

Jesus’ lamentation over Jerusalem was surely as bitter as Jeremiah’s was, In Luke’s record we are told that Christ wept over the city, and Christ earnestly desired to see the salvation of the Jews, and despite all he had done it would not come yet, for it would have to be made desolate first as they would not allow themselves to be gathered together in Christ.

“O Jerusalem, Jerusalem, the city that kills the prophets and stones those who are sent to it! How often would I have gathered your children together as a hen gathers her brood under her wings, and you would not! See, your house is left to you desolate. For I tell you, you will not see me again, until you say, ‘Blessed is he who comes in the name of the Lord.'” (Mat 23:37-39) 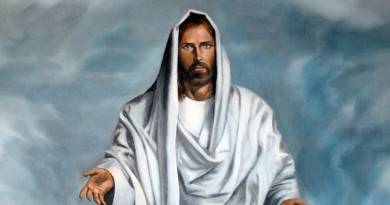 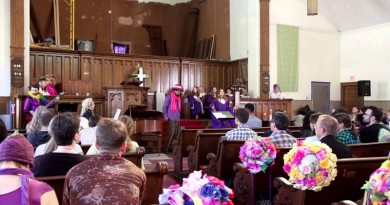 Building the Church of God 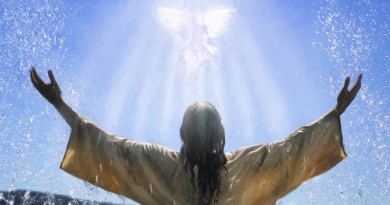