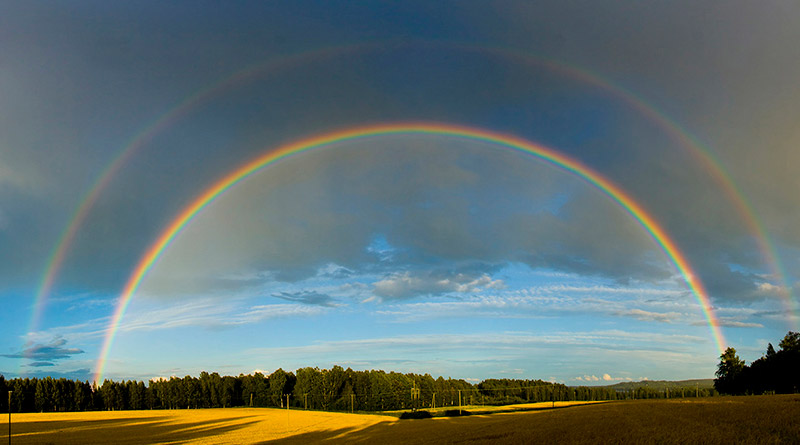 Bible Study
28th March 2016 BibleStudy 5 Comments rainbow
Print This Page
In our last study we reflected upon the shape of the rainbow and what scripture teaches it should suggest to us when we see it in the sky after rain. Psalm 7:11,12 states: “God is angry with the wicked every day. If he turn not, he will whet his sword; he hath bent his bow, and made it ready”. This shows clearly that a bow is used as a symbol of God executing His judgement upon men.

We also learned that the rainbow is a bow with no arrow, so teaching the mercy of God, in His love, taking away a judgement that we deserve. This is emphasised in the visions that are seen of the presence of God in heaven, where He is manifested with a rainbow about Him. Ezekiel was told in Ezekiel chapter 1:28 that this was “the appearance of the likeness of the glory of the Lord”. God’s glory is His character and it is reassuring to us sinners that He is manifested with a symbol of judgement taken away.

Is the bow upside down?

Further reflection on the symbol of the rainbow might suggest that it is pointing the wrong way. If it is a symbol of God’s righteous judgements, then surely it should point towards men on earth, those who are liable to judgement. The fact that it points toward heaven should raise a question in our minds.

It is interesting to learn that when certain climatic conditions apply, an inverted rainbow can appear in the sky pointing towards earth rather than towards heaven. Scientists inform us that the physical conditions that give rise to this are when, at high altitude, ice crystals are in the air rather than droplets of water. Although at first sight we may think that this knowledge was unknown in Biblical times, this may not be the case. The fact that a rainbow pointing downwards was seen, particularly in very cold weather, could easily lead to the conclusion that the change in direction was caused by water in the form of ice.

Examining scripture with these facts in mind helps us to understand that the way a rainbow is normally seen is appropriate and shows a further important lesson.

The lesson of its orientation

In Psalm 147 the psalmist reflects upon the power of God in nature. In verse 17 he states that God “casteth forth his ice like morsels”. He sees the hand of God in producing icy conditions. He then sees how God causes the ice to melt: “He sendeth out his word, and melteth them” (verse 18).

This was particularly done through God’s Son who perfectly showed the same character as his Father. John refers to Jesus as both the Word made flesh and the one who displayed God’s character or glory.

“And the Word was made flesh, and dwelt among us, (and we beheld his glory, the glory as of the only begotten of the Father,) full of grace and truth.” (John 1:14)

The ultimate declaration of God’s willingness to change the direction of the potential weapon of His judgement away from us and towards heaven is seen in the Lord Jesus.

It is the light of the rays of the sun that change ice into water and in spiritual terms, it is the Word made flesh, the Light of the World (John 8:12), the Sun of Righteousness (Malachi 4:2) that changes the direction of the rainbow.

The rainbow then symbolises judgement taken away from us by the work of the Lord Jesus Christ, who showed the character of God in willingly giving himself as a sacrifice for us. The direction of the bow pointing upwards should remind us that it was the Lord Jesus who suffered the judgement upon sin and represented us on the cross in his death, suffering the judgement that we deserve.

The colours of the rainbow

The remaining feature of the rainbow that impresses us when we see one in the sky is its colouring as pure sunlight is split into a continuum of colours, broadly divided as below. We may be familiar with the scriptural meanings behind some of these colours. The following meanings are suggested:

So what does the setting of these colours alongside each other teach us? Setting their scriptural meanings alongside each other suggests a progression from flesh to rulership. In the same way that Israel were intended by God to be a kingdom of priests (Exodus 19:6), so it is God’s purpose that all in Christ should be kings and priests, ruling in the coming kingdom age:

“And hast made us unto our God kings and priests: and we shall reign on the earth.” (Revelation 5:10)

We also know that it is pure white light that is being refracted into these seven colours, so that when all the colours are combined, the result is white light. So it is that those who will be kings and priests, who become the bride of Christ, “should be arrayed in fine linen, clean and white” (Revelation 19:8). The colours of the rainbow are designed to show us how the mercy of God is personal to you and to me. In spite of our own sins we are able to see ourselves as part of Christ’s bride in the kingdom age.

This is the prophetic element in the rainbow. You may recall from our first study the words of Genesis 9:15 that showed the purpose of the rainbow as being a reminder to God. In one sense, God in His perfect knowledge does not need reminders, but evidence that God will not forget can be comforting to us as we live our lives.

Based upon our reflections, what then do we think that it would remind God of? Genesis 9:15 says of God: “And I will remember my covenant … the waters shall no more become a flood to destroy all flesh”. God’s covenants with man also show the hope of the alternative to destruction, a place in a replenished earth cleansed by judgement. The rainbow shows us that God continues to be aware of His promise not to destroy the earth and the way in which we can be changed from flesh to being rulers in that kingdom. The wonders of its colours are designed to remind us of the transformation that takes place in us through God’s love seen in His work through Jesus. As well as being thrilled by its beauty, it can help us reignite the thrill of sins forgiven and of the hope of God’s kingdom, knowing that God will always remember the covenant that He has made.

The lessons for us

As we live our own lives in today’s world, it is an increasing challenge to us not to waste our time on ‘innocent’ activities that are of no value, but rather to concentrate on ensuring that whatever we are doing we are serving God by it. In this way the whole of our lives can be lived in service to God. To do this we need to ensure that God’s principles are seen in all aspects of our lives, whether it is in our work, our relationships or more obvious ways that we serve God.

World politics provide convincing evidence that the return of Jesus is nearing. In Luke 17:26,27, Jesus identified a of lack of time for God as a feature of the situation in the world prior to his return to the earth. Appreciating the symbolism of the rainbow provides a sign to us to help us retain our faith in God’s purpose and to respond to the love that He has shown to us in Jesus. Next time you see a rainbow – think about it and be encouraged! 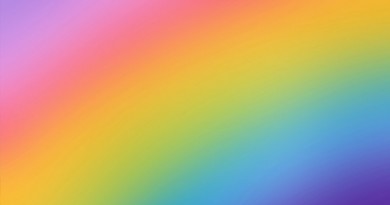 The Significance of the Rainbow – Part I

5 thoughts on “The Significance of the Rainbow – Part II”