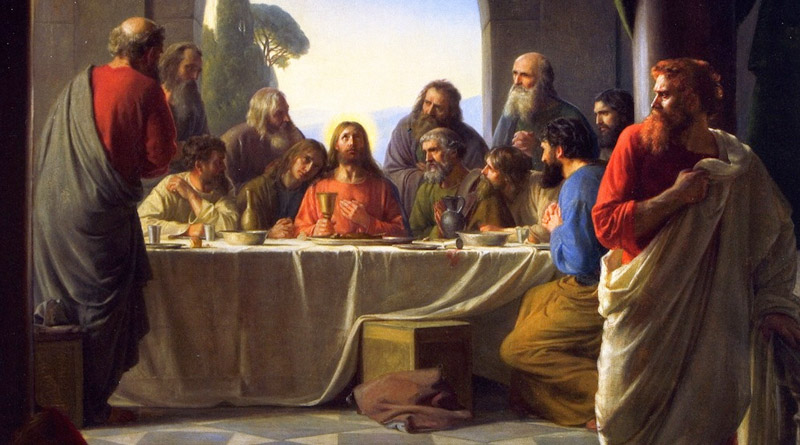 Sermons
29th March 2016 BibleStudy 0 Comment betrayal, Judas
Print This Page
In John chapter 6, following the miracle of the feeding of the five thousand, “the Jews” found the teaching of the Lord Jesus increasingly difficult to accept. Even many of his disciples found his words “hard” and “from that time … went back, and walked no more with him” (verses 60-66). At the end of this chapter the Lord addresses the twelve – his closest disciples – and asks, “Will ye also go away?” Peter responds with a magnificent declaration of faith, but Jesus’ next remark must have startled his hearers: “Have not I chosen you twelve, and one of you is a devil?” John, the inspired Gospel writer explains, “He spake of Judas Iscariot the son of Simon: for he it was that should betray him, being one of the twelve” (verses 68-71). Judas Iscariot was a “devil”, a false accuser, in that it was Judas who would betray the Lord.

John returns to this point later in his account of the upper room: “And supper being ended, the devil having now put into the heart of Judas Iscariot, Simon’s son, to betray him …” (John 13:2). It was not the influence of an outside superhuman being, but the inclination of his own desires that led Judas to do this evil work. His decision was no doubt made after a long period of reflection, but the Lord, who “knew what was in man” (John 2:25) was fully aware of the choice Judas had made.

Later Jesus announces, “I know whom I have chosen”: Judas had never deceived the Lord. This statement is followed by a quotation from the Psalms: “but that the scripture may be fulfilled, He that eateth bread with me hath lifted up his heel against me” (John 13:18; cp. Psalm 41:9). Psalm 41 is about that time in David’s life when he faced a serious rebellion by his son Absalom and had to flee from Jerusalem. Then he discovered that his trusted friend and counsellor, Ahithophel, had betrayed him and joined the rebels. David laments: “Yea, mine own familiar friend, in whom I trusted, which did eat of my bread, hath lifted up his heel against me”. The treachery of Ahithophel foreshadowed the greater treachery of Judas, but whereas David had been taken totally by surprise, Jesus was not. Notice that when the Lord quotes the words of the Psalm he pointedly omits the opening phrase, “mine own familiar friend, in whom I trusted”. David trusted Ahithophel, but Jesus never trusted Judas. There is an important lesson for us here. The Lord who knows “what is in man” knows everything about us – our deepest motives and intentions – just as he knew Judas. We may be able to hide much from our fellows, but we cannot hide anything from him.

We should perhaps also recognise that Judas evidently had considerable potential. Another of David’s psalms says of Ahithophel (and by extension Judas), “It was thou, a man mine equal, my guide, and mine acquaintance. We took sweet counsel together, and walked unto the house of God in company” (Psalm 55:13-14). Sadly, in neither case was the potential realised.

In all of this we are reminded that in certain circumstances evil men are used by God, as the wise man says in Proverbs: “The LORD hath made all things for himself: yea, even the wicked for the day of evil” (Proverbs 16:4). Judas Iscariot was one of these evil men. He had free will to choose his way – as we all have – but the Lord knew his choice before ever he made it. Yet, he did nothing that would assist in the hardening of Judas’ heart. He didn’t reveal what he knew of him, until the end. The Lord even treated Judas as a close friend: note that in John 13:26 Jesus offers him “a sop” – a special morsel of food taken at the meal. By offering it to Judas, it was a token of friendship. But it made no difference, for his mind was set on betrayal. John records that Judas, “having received the sop went immediately out: and it was night” (verse 30). We find on a number of occasions in John’s Gospel a contrast between night and day, light and darkness. When Judas left the upper room he went out into the “night”, that is, the world of darkness to which he belonged. Later, he hanged himself, just as Ahithophel had done in the past.

Before Judas left the upper room the Lord had said to him: “That thou doest, do quickly” (verse 27). The other disciples did not understand the significance of this instruction. With the benefit of hindsight we know what was meant and we can see, remarkably, that the Lord remained master of the situation. He set in motion the chain of events leading to his death, not his enemies. Jesus knew exactly what was going to happen; he knew that within another day this last agony would be past and he would be waiting in the grave for that glorious resurrection and immortality to follow. But the disciples did not know this, and as we read on we can detect their bewilderment, their surprise at Jesus’ words, their failure to grasp his meaning.

In Gethsemane the Lord went three times to his Father in prayer and thus prepared himself for his final trial. Judas arrived “and with him a great multitude with swords and staves, from the chief priests and the scribes and the elders” (Mark 14:43). He had arranged to identify Jesus by kissing him. The Greek term that is used in verse 45 indicates ‘to kiss much, again and again, tenderly’, and Jesus was arrested.

Why did Judas behave in this way? Fundamentally, he did not love his Lord – he loved himself. We are told in (Acts 1:18) that he had bought a field “with the reward of iniquity”. This is not a reference to the thirty pieces of silver because he took them back! What, then, was “the reward of iniquity”? We have a clue in (John 12:6) which tells us that Judas was “a thief, and had the bag (the cash box), and bare what was put therein”. He was the treasurer of the disciples and used the money he stole to buy himself some land (Matthew 27:4-10) suggests that the Jewish rulers later bought the field back from his family).

Peter had said to the Lord on one occasion: “Behold, we have forsaken all, and followed thee” (Matthew 19:27): that was true of Peter and the other ten, but not of Judas Iscariot. Despite his association with the Lord Jesus, he had not broken free from his attachment to the world. John in his First Epistle says that, “If any man love the world, the love of the Father is not in him” (1 John 2:15). Jesus declared, “No man, having put his hand to the plough, and looking back, is fit for the kingdom of God” (Luke 9:62).

“Looking back” is a dangerous thing to do. There seems to be an allusion here to the call of Elisha in (1 Kings 19:19). Elijah “cast his mantle upon him”. Elisha said his farewells, slew the yolk of oxen, and followed Elijah – there was no looking back for him. For others it was different. Think of Lot’s wife in Genesis, who, having been brought out of Sodom before its destruction, “looked back from behind him, and she became a pillar of salt” (Genesis 19: 26). This is surely not saying that she merely glanced back to see what was happening and consequently perished. The expression, “from behind him” suggests that she was lingering behind. No doubt she had left members of her family in Sodom. The words of the Lord in Luke 17 suggest that this is the right interpretation of what happened. Speaking in the first place of another great destruction – this time of the city of Jerusalem in AD 70 – he says: “He that is in the field, let him … not return back. Remember Lot’s wife (verses 31-32). She was not just glancing back, but lingering behind, returning to Sodom; and those to whom Jesus was speaking were being warned against following her example.

As we come week by week to remember the Lord in bread and wine, the appointed memorials of his death, and give thanks for the salvation provided for us in Christ, let us not “look back” and like Judas Iscariot, love this present world. Instead, as the Apostle Peter in his First Epistle says, we should be like “strangers and pilgrims” – men and women who are passing through this life to reach our ultimate destination of the kingdom of God. If that is what we really want now, then in God’s mercy we shall be there.