In 1896 Herzl published “The Jewish State”. It was not a religious pamphlet – far from it! He declared the driving force that impelled him to be “The misery of the Jews” and urged his readers to see in this prospect the road to their freedom and happiness.

“The Jews who wish for a State shall have it”, he wrote, but they had to make it happen. That was how Herzl saw things, for he was not a believer in God and was against a State in which religion played any part. There is no mention of God, or of the Biblical prophecies in his booklet. He urged his readers to fight unselfishly for the cause saying that “whatever we attempt there to accomplish for our own welfare, will react powerfully and beneficially for the good of humanity.”

As things turned out the political struggle was an uphill one, but once the idea had taken firm root in the Jewish consciousness all sorts of things started to happen which moved things in the right direction.

Some very rich Jews purchased land in Palestine and encouraged Jews to settle there and farm the land. Some began to move back to the land as settlers.

A Jewish chemist – Chaim Weizmann – made a discovery which was a valuable contribution to British military success in the First World War and was rewarded when the British Government made the “Balfour Declaration” in 1917 to say that they would support the re-establishment of a Jewish presence in Palestine.

Anti-Jewish feelings continued to run high in many countries leading to Adolph Hitler’s attempt to exterminate the entire race. When 6 million Jews perished in the gas chambers of Europe the consciousness of the world was stirred as never before.

The United Nations voted to partition the Land between Jew and Arab, Russia and America agreeing that it was the best solution.

None of that was obviously the work of God, but indeed it was! God works behind the scenes to accomplish His purpose and thus His ancient nation was reborn. Those who had once been His people began to resettle in His land in unbelief and complete ignorance of God’s purpose. The Provisional Government which was brought into existence hastily in 1948, to conduct the War of Independence, that had to be fought at once, was a humanist and socialist one. There was no recognition of God’s purpose: His prophets were seen merely as part of ancient Jewish culture and their dreams and predictions merely the dreams and aspirations of Jewish people who loved the land.

How does all that fit in with the terms whereby God allowed Israel to possess the land in the first place? How could He allow a faithless people to regain possession when they had lost possession in the first place because of their faithlessness? The answer tells us a great deal about the God of the Bible and His marvellous kindness towards all people who are in great need of His help, even when they don’t recognise that need.

Even when the terms of occupation were being drawn up — like a lease to grant them occupation — God recognised that if the terms were broken He might still have to act to rescue the position, for their sake. The Jews were to obey His commands if they wanted to stay there; they would be expelled if they disobeyed and lost their faith, and then God added this provision:

“The land also shall be left empty by them, and will enjoy its sabbaths while it lies desolate without them …Yet for all that, when they are in the land of their enemies, I will not cast them away, nor shall I abhor them, to utterly destroy them and break my covenant with them; for I am the LORD their God” (Leviticus 26:43-44).

The prophecies about the return to the land pick up the very same provision. God was acting, says the prophet Ezekiel, to recover the situation for His own sake. He was bringing His people back to occupy the land so that His purpose could reach its final phase:

For nearly 2000 years God has waited and watched but now He is taking action. It is the first step in the process of retaking control of the world and its government. The Jews are back in their ancient land because Bible prophecy requires them to be there for the return from heaven of their King — the Lord Jesus Christ.

He was once asked to foretell the signs that would lead to His return as King at the end of the age. Jesus detailed the events that have happened since, over nearly 2000 years. You can read it in Luke chapter 21 and you will at once recognise our world as one in which people fear for the future and worry about what disas ter is coming next. But what did Jesus say about the Jewish people and their future?

“There will be great distress in the land and wrath upon this people. And they will fall by the edge of the sword, and be led away captive into all nations. And Jerusalem will be trampled by Gentiles until the times of the Gentiles are fulfilled” (Luke 21:23,24).

Jesus said that the time would come when Jews would be back in Jerusalem and, if you read on in the prophecy, you will see that has to happen before Jesus himself returns:

“Men’s hearts failing them from fear and the expectation of those things which are coming on the earth, for the powers of heaven will be shaken. Then they will see the Son of Man coming in a cloud with power and great glory” (21:26,27).

Long before Jesus had been born, and thus well before his Ministry to the Jews had begun, the prophets foretold that he would be rejected when he came. Nothing takes God by surprise. The Saviour, who would come to rescue mankind from sin and death, was destined to be rejected and to suffer a painful and public execution. Jesus came to his own people but they did not receive him, as the prophets said:

“He is despised and rejected by men, a man of sorrows and acquainted with grief. And we hid, as it were, our faces from him; he was despised, and we did not esteem him. Surely he has borne our griefs and carried our sorrows” (Isaiah 53:3-4).

That was just how it happened, as the New Testament confirms:

“He came to his own, and his own did not receive him. But as many as received him, to them he gave the right to become children of God, even to those who believe in his name: who were born, not of blood, nor of the will of the flesh, nor of the will of man, but of God” (John 1:11-13).

There was an offer of rebirth but the nation as a whole did not respond, though many individuals gladly accepted Jesus as their Lord. That offer will come again to those who have returned to the land and who are due to become the people of God in every sense. That offer is open to us now.

When Jesus comes — to rescue Israel and all the world from trouble — he will invite the Israelis to accept him. And many will. By belief and baptism they will then become a cleansed and purified people, just as we can be now, if we put our trust and faith in the Lord Jesus Christ and accept him as our Saviour and King:

“I will pour on the house of David and on the inhabitants of Jerusalem the Spirit of grace and supplication; then they will look on me whom they have pierced; they will mourn for him as one mourns for his only son, and grieve for him as one grieves for a firstborn … In that day a fountain shall be opened for the house of David and for the inhabitants of Jerusalem, for sin and for uncleanness” (Zechariah 12:10; 13:1);

It follows that whilst the Jews are a special people in God’s sight, and are still a people He loves and cares for, they are not yet fully back in His favour as the people through whom His great purpose will be accomplished. When they return to God, a new people will be constituted — from all nations, including Israel — who will be called the people of God. So out of Israel’s calamity will come great joy and rejoicing for all God’s people. 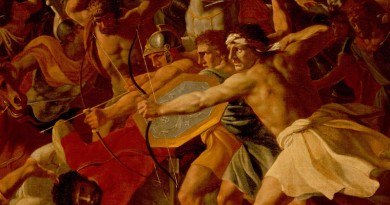 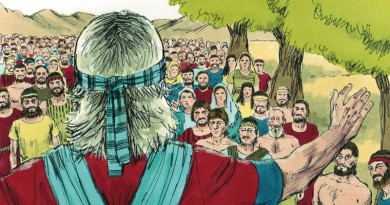