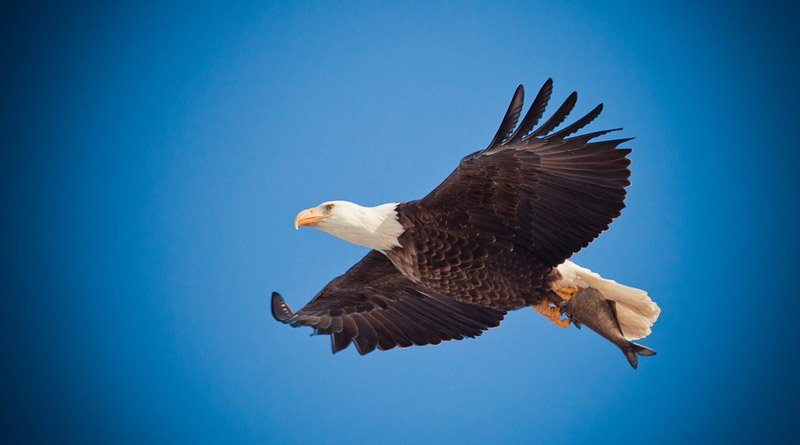 Articles
1st April 2016 BibleStudy 4 Comments birds, eagle, nature
Print This Page
Soaring majestically amongst the mountain peaks; diving at speed from great height; ferociously catching and devouring their target; birds of prey can capture our imagination. They are a blend of beauty and menace, precision and power; a force in nature which can make us hold our breath in wonder.

We associate these birds with speed and power, and rightly so. When hunting, peregrine falcons use a flying technique called the ‘stoop’. They fly high above their prey and close their wings, going into a downwards dive. A ‘stooping’ peregrine falcon is the fastest animal on earth, reaching speeds of over 300 km per hour (200 miles per hour). By reaching such a speed, they are able to stun or often kill their target outright.

These powerful birds have remarkable eyesight, because they have many more light receptor cells in their eyes than humans. A buzzard can see 8–10 times farther than we can: it can spot its prey from three kilometres away! Most birds have eyes on the sides of their head, which gives them a wide field of view to look out for danger. But birds of prey have their eyes in front – just like other hunters – which gives them binocular vision. This is when both eyes can focus on one thing at the same time. It makes it much easier to judge distances, which is vital when chasing prey.

Eagles in the Bible

Where the Bible uses the image of an ‘eagle’, the original word in Hebrew means an eagle or other large bird of prey – we might use the general term ‘raptor’. It does so in a number of different ways. The first is in the context of God’s judgements. Nations used by God to punish Israel are described as being like an eagle: fierce, swift and implacable in their attacks. In Jeremiah 4:13, the prophet is warning of impending invasion by the Babyloni­ans, whose “horses are swifter than eagles”. In his mourning over the fate of Jerusalem, Jeremiah says:

Our pursuers were swifter than the eagles of the heavens (Lamentations 4:19).

In Deuteronomy 28:49, Moses is warning the people of Israel against rejecting God. The punishment for doing so will come from invasion by another nation “as swift as the eagle flies”.

It is easy to see how the birds’ powerful features enable them to catch their food and to fight off competitors. However, it is also fascinating to see them apply their abilities in rearing their young.

Birds of prey build large, robust nests. In them, their chicks grow quickly and need a lot of food, which has to be caught by the adults. The parents will fiercely protect their offspring from predators by land or air. When the young birds are ready to take their first flight, the parents are there to encourage and coax them from the nest, and will feed and protect them until they can care for themselves.

The picture of a raptor is also used to describe God’s care for His people. This is a compelling idea, and it is also comforting, to think of the power of the Almighty brought to bear in the nurture of those who are His. When God described the way in which He brought Israel out of Egypt, He said:

You have seen what I did to the Egyptians, and how I bore you on eagles’ wings, and brought you to myself (Exodus 19:4).

This speaks both of His might used to destroy the Egyptian army, and His care exercised to protect and release His people.

Shortly before he died, Moses spent time recounting to Israel the Law given by God, as well as the events of the exodus from Egypt and the forty years spent in the wilderness. In Deuteronomy 32, he talks poetically about how God cared for Israel. the nation was saved from “a wasteland, a howling wilderness… He kept him as the apple of His eye” (v10).

He goes on to describe God watching over His people, protecting and lifting them up out of trouble and caring for them with the dedication and ferocity of a parent raptor:

As an eagle stirs up its nest, hovers over its young, spreading out its wings, taking them up, carrying them on its wings (v11).

This does not only apply at a national level though. God sees His people as precious individuals. A great example of this is the story of Ruth, an immigrant to Israel, with no–one to provide for her and no practical hope. God provided her with a husband, a family and a place in His purpose. Early in the story, Boaz (who she would later marry) described her as taking refuge under the ‘wings’ of the Lord God of Israel (Ruth 2:12).

Another dramatic use of eagles as illustration is to show the power of the life that God gives to those who love Him. He enables them to live dynamic lives today, energised by knowing His plan. And He promises an endless life in His kingdom: one of strength, of energy and of divine purpose.

Those that wait on the LORD shall renew their strength; they shall mount up with wings like eagles; they shall run and not be weary, they shall walk and not faint (Isaiah 40:31).

4 thoughts on “Eagles in the Bible”